Lila's dads, Kohei and Andrew, are fighting in court to achieve this simple wish.

Kohei is Japanese, while Andrew is American. In 2015 they were legally married in America, but Andrew is unable to obtain a spousal visa because Japan doesn't allow same-sex marriages. Even now, after living as a couple in Japan for more than ten years, Andrew would be unable to live in Japan with Kohei and Lila if not for a visa sponsored by his workplace.

In order to have a visa not tied to his employment, Andrew applied for long-term residency, but was rejected five times.

The right to live peacefully with the family you choose should be a universal right, not open only to opposite sex couples. But because Kohei and Andrew are both men, their marriage isn't recognized in Japan.

Although they were in the midst of the lawsuit, Kohei and Andrew welcomed the puppy Lila into their family in 2020. The life that these two dog lovers dreamt of had been difficult to achieve in the eyes of the Japanese in court, but believing in the future of their family, they took the step to move that much closer to their goal.

Same-sex marriage is not recognized in Japan. However, that is not to say that the rights of same-sex couples are ignored altogether. For instance, a couple where both parties are foreign nationals, such as a marriage between an American and a British person, would be able to obtain a designated activities visa for one partner if the other party already had residency status connected to their employment or education.

About the different types of visas

In the 1978 McLean v Ministry of Justice case, the Supreme Court ruled the basic human rights guaranteed in the Constitution are only afforded to foreigners within the framework of Japan’s residence status system. In other words, there are times in which the fundamental human rights of a foreign resident will not be taken into consideration in the visa application review process.

This court case argues that the fundamental human rights bestowed upon us at birth are not something we need to bargain for with the government or immigration authorities.

About the verdict of the 1978 trial

Many of the problems involved in this case would be solved if same-sex marriage were legally recognized in Japan. However, discrimination against foreigners, which is at the center of this lawsuit, would remain unaddressed.

In addition, the realization of same-sex marriage will require legislation, which will take time to put into effect. In the meantime, many people in Kohei and Andrew's situation will continue to be subjected to unreasonable treatment and discrimination.

Respecting people's basic right to live together as a family is a simple problem to solve. Many people can be helped immediately just by changing the inhumane way in which the immigration authorities treat married couples.

Anyone from the public is permitted to observe the court proceedings, and there is no need to show identification to enter. There is power in numbers and in showing that this case matters to us.
Please come and show your support! 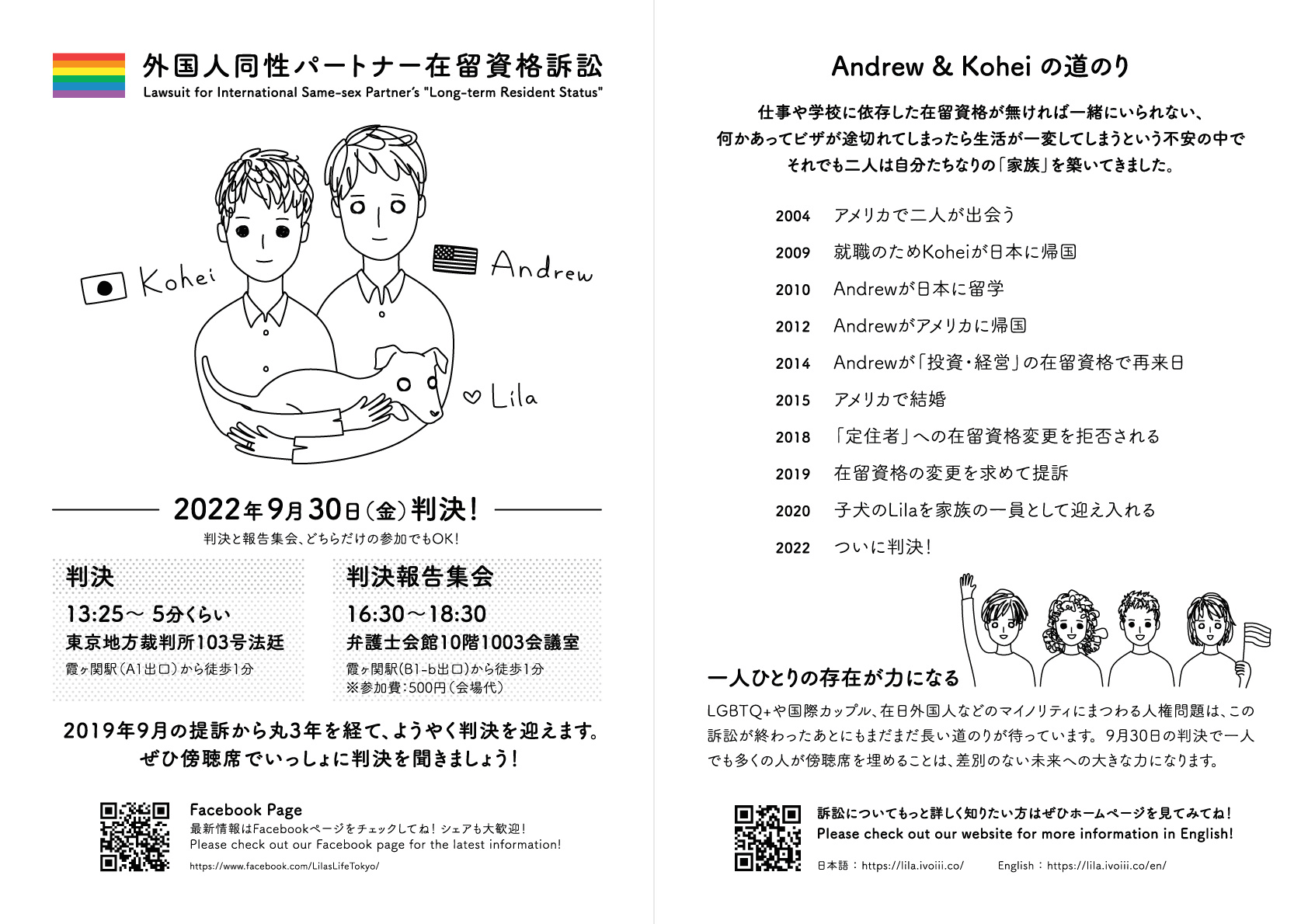 ▶︎PDF file of the flyer You can print it on both sides of an A4 paper, cut it in half and you will have two flyers! Please spread the word online or offline however you can! 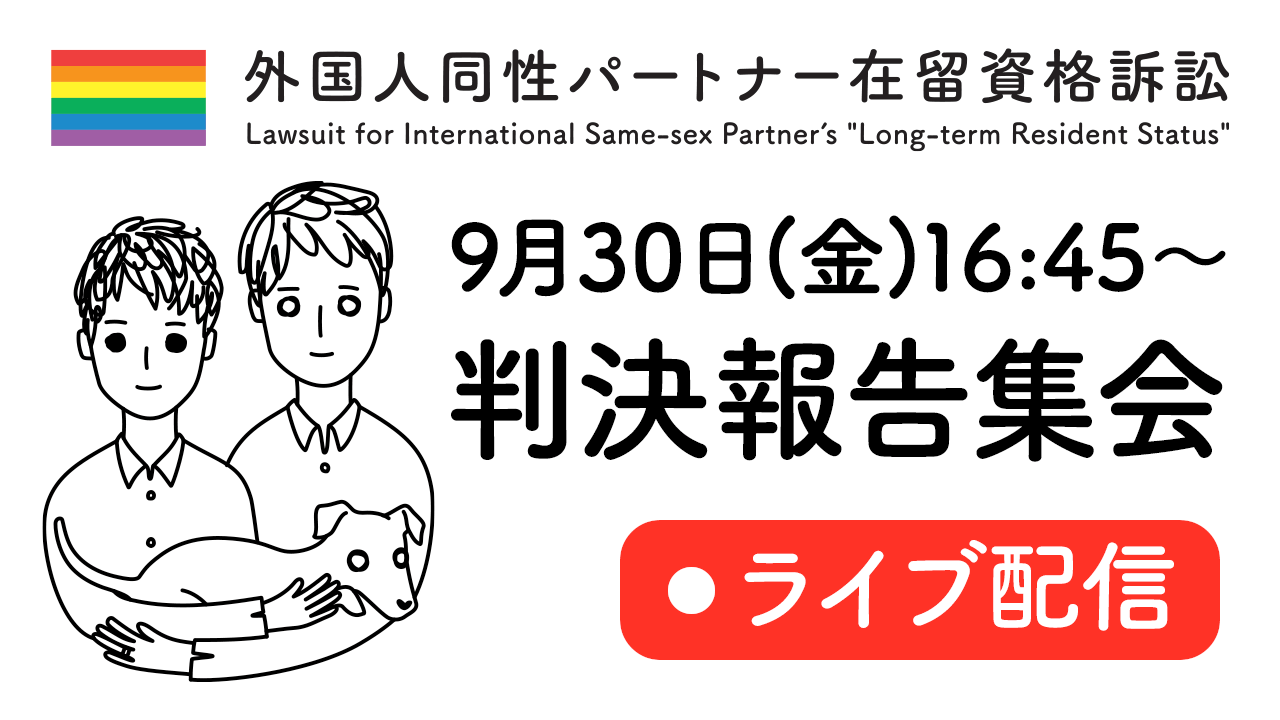 Please contact us via the email above for the streaming URL.

Walk one minute from the A1 exit, and the Tokyo District Court will be on your right.

2. Please enter through the civilian entrance

There are two entrances once you come through the front gates. The door on the right is the general entrance. Once you go inside, there will be a security check similar to those at an airport. Follow the instructions of the people in charge and enter the courthouse.

3. You are free to enter and exit as you please

Courtroom number 103 is on the ground floor. You can enter even if the proceedings are already underway!

The timeline of the trial

The sessions from the second to the ninth, spanning about two years, consisted of what is called a "legal brief". This time consisted of the plaintiff and the defendant presenting their respective cases and preparing documentation needed for the trial. During the cross-examination, the plaintiffs, Kohei and Andrew, will stand in court and speak on their right to live in Japan as a family.

The power of an audience

You might feel that you won't have any real influence just by coming to watch the trial.

The truth is, showing up is extremely important!

If the gallery is full, it sends the message that the public is very concerned about this issue. It tells the judge and the defendants (the country and Immigration Bureau) that it matters to us, we are watching, and waiting for an equitable verdict!

There are two demands included in this lawsuit.

The first demand asks that Andrew's application for long-term residence be approved.
The second seeks state compensation for mental anguish caused by the deprivation of the freedom to form and maintain a family.
When you hear the phrase "state compensation," it may seem like the case is about the money, but at the heart of this case is the state’s infringement on Andrew's and Kohei’s human rights, and the culpability of the government and immigration authorities for these violations.

The types of resident status

There are three types of visas available to the married partner of a resident of Japan. "Spouse or Child of Japanese National" and "Long-Term Resident" are granted to those who have a family relationship with a Japanese national or whose lives are rooted in Japan, while the "Designated Activities" visa is granted to those who are expected to stay in Japan temporarily.

Spouse or Child of Japanese National
This is a resident status reserved for the spouse (husband or wife), child, or legal ward of a Japanese national. However, this visa is not automatically awarded to any person married to a Japanese national. The relationship is subject to inspection and may be denied in certain circumstances, such as if there is a large age gap between the two parties, they have been together for a short time, they have low income, or they met on a dating site online. Foreigners who have been married to a Japanese national for at least three years and have lived in Japan for more than one year are eligible to apply for permanent residence.

Long-term residence
This visa is granted to individuals who are determined by the Ministry of Justice to have special circumstances that warrant permanent residency. This includes such groups as ethnic Japanese living abroad, refugees, and those who have been widowed or separated from their Japanese spouse. An individual who has stayed in Japan on this type of visa for five years or longer is eligible to apply for permanent residence. We are arguing that in Andrew's situation, he should qualify for a long-term resident visa as well.

Designated activities
This is a status of residence that allows the Ministry of Justice to designate specific activities for individual foreign nationals for activities that do not fall under any other status of residence. This may include domestic servants of diplomats, those on a working holiday or internship, and amateur athletes, among others. This visa status may be awarded to one party of a non-Japanese same-sex married couple if both parties live in Japan and one is under a business-related or other such visa.

This lawsuit concerned a foreigner's status of residency and their freedom to participate in political activities. The verdict of this 1978 Supreme Court case was that the basic human rights guaranteed in the Constitution are only afforded to foreigners within the framework of Japan’s residence status system. The Immigration Control and Refugee Recognition Act is a law, and as such should not take priority over higher legal standards such as the constitution and treaties. However, the ruling in this case has been used as basis for The Immigration Control and Refugee Recognition Act to take precedent over the constitution and treaties when dealing with foreigners. This ruling has cast a dark shadow over the human rights of foreigners in Japan for over forty years.

We are not the only ones fighting for the rights of same-sex couples in Japanese court right now! The "Marriage for All Japan" lawsuit is currently taking place in courts in Sapporo, Tokyo, Nagoya, Osaka, and Fukuoka. If you are able, please attend as an observer at a courthouse near you or share information about the lawsuit online.

Marriage For All Japan

What's next after the trial?

If the plaintiffs are to win this lawsuit, Andrew will be able to obtain his long-term residence visa. This would set a precedent for the Immigration Bureau to address future same-sex couples in the same way. Binational same-sex couples are families. Someday soon, that fact may be enough for them to obtain resident status.

Here are some articles about our trial. 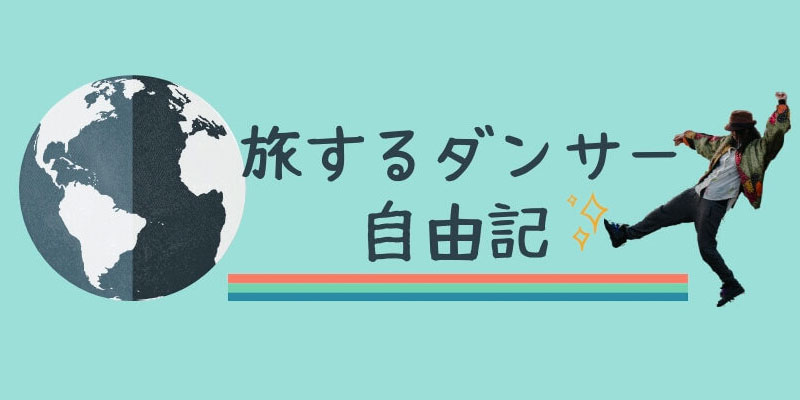 Madoka has written about our lawsuit on her blog! 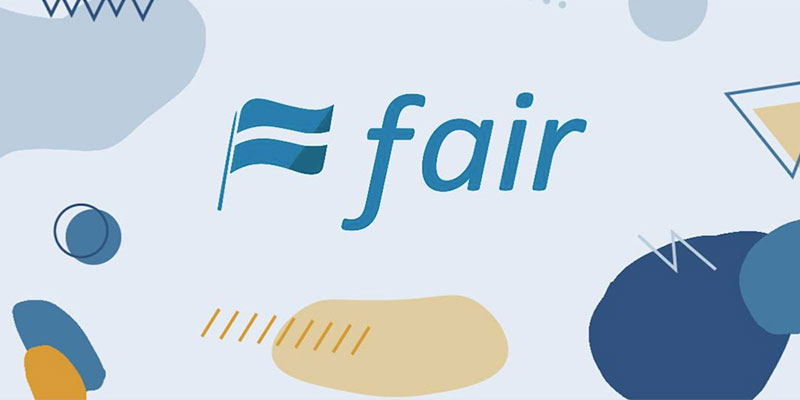 Read Soshi Matsuoka's article on the opinion statement at the first session! 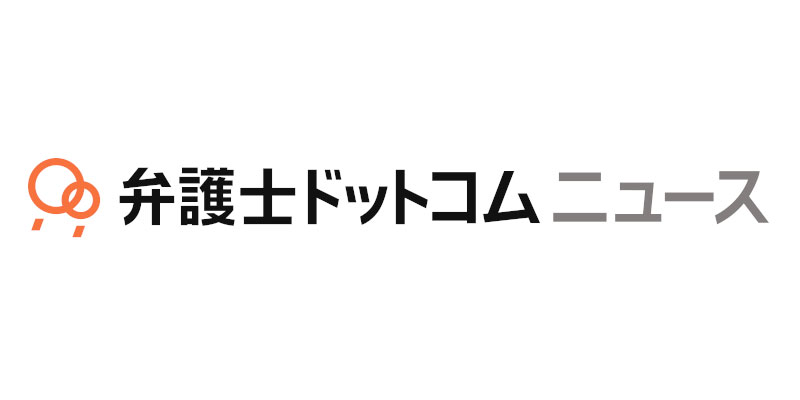